What Are the Symptoms of Whiplash From a Rear-End Collision? 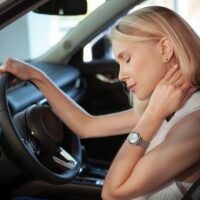 If you’ve ever been rear-ended by another driver, you might have experienced neck pain, headaches, and other symptoms. One of the most common injuries suffered by victims of rear-end collisions is known as whiplash syndrome. Although common, whiplash can be extremely painful, limiting, and debilitating. Below, we discuss the symptoms commonly associated with whiplash syndrome. If you’ve been involved in a rear-end collision in Southern California, watch out for any of the symptoms discussed below, and call a seasoned Agoura Hills car crash attorney for help recovering compensation for your injuries.

Whiplash, also called whiplash syndrome or whiplash injury, is a neck injury caused by a forceful, rapid back-and-forth movement of the neck. The head is forced to snap back and forth like the cracking of a whip, causing damage to the spinal bones and the disks between the bones, as well as the ligaments, muscles, nerves, and other soft tissues in the neck. Whiplash commonly arises after rear-end collisions but may also result from physical abuse or assault (being punched or shaken) as well as from contact sports (for example, hard tackles in football).

Whiplash is incredibly common after rear-end collisions and other incidents. In fact, as many as two million people suffer from whiplash every year. A number of factors can increase the severity of whiplash, including existing back or neck injuries, high-speed collisions, having previously had whiplash, and old age.

If you’ve been in a rear-end collision, there are many symptoms to watch out for to identify if you may have suffered whiplash. It’s important to identify whiplash as soon as possible and to seek appropriate guidance from a medical professional. Failure to treat whiplash appropriately can lead to long-term troubles including chronic, severe pain, limited range of motion, pain that spreads to the arms, and neurological issues.

After a rear-end collision, watch out for any of the common symptoms of whiplash, including the following:

Because whiplash can involve injury to the spine and neck, the damage can be pervasive. Nerve and spinal cord damage can affect various extremities and can even lead to neurological problems by interrupting the body’s signals to the brain. If you have been in a car accident, especially if you experience any of these symptoms, see a doctor immediately for diagnosis and recommended treatment.

Whiplash is a Danger Even in Low-Speed Collisions

One of the most troubling parts about whiplash syndrome is that it can occur even in low-speed “fender-benders.” The physics of the “whipping” motion, in which the torso is thrust forward while the head whips back and forth on the neck, is such that the head is likely to move at several times the speed of the vehicles involved. Even if the vehicles collide while going only 5 to 15 MPH, an accident victim’s head might have whipped around at two or three times that speed.

If you identify any symptoms of whiplash after a rear-end collision, even if the collision happened in a parking lot or garage at low speeds, it is still extremely important to see a doctor. You may have whiplash syndrome, and going without diagnosis and treatment can lead to much more serious harm. Even if your vehicle has barely a dent, you might still have an injury. Getting a diagnosis immediately is important both for your health and for protecting your legal rights with regard to insurance companies and the driver who rear-ended you.

If you or someone you love has been injured in a rear-end collision in Southern California, call a dedicated and trial-ready personal injury attorney at the Halpern Law Firm. We fight for the compensation you and your family deserve. Contact us at (818) 785-5999 today. These cases are handled on a contingency basis, meaning you won’t be charged any attorney’s fees unless we win.