Can I Sue Uber for a Car Accident? 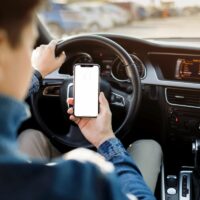 Rideshare drivers for Uber and Lyft are all over the roads. Unfortunately, many of these drivers are no more qualified to drive professionally than your average motorist, despite being on the road for long stretches of time. If you are hit by a negligent Uber driver, what are your options? Can you sue Uber, or are you limited to the driver’s personal insurance coverage? Read on to learn about filing claims against Uber after an accident, and call an experienced Calabasas auto accident attorney for help with a California car crash claim.

Suing Uber as Another Motorist

Traditionally, liability for a company like Uber would turn on legal principles like “respondeat superior,” which holds companies liable for the actions of their employees. But because Uber considers drivers to be independent contractors rather than employees, issues of liability might get tricky and contested.

Thankfully, whether or not you’d prevail in a classic lawsuit against Uber, California law requires Uber to carry insurance for the benefit of anyone injured by one of their drivers during a trip. The level of insurance coverage (and Uber’s level of tacit acceptance of responsibility) depends on when the accident occurred:

Suing Uber as a Passenger

If you are a passenger in an accident during an Uber ride, your rights depend on who caused the accident. If the accident was the fault of another driver outside your Uber, then you would need to proceed against that driver under their insurance. If your accident was your Uber driver’s fault, however, then you can file a claim against Uber and benefit from the $1 million insurance policy.

Notably, Uber is also required to carry significant uninsured and underinsured insurance for the benefit of Uber drivers and passengers. If the driver who hit your Uber does not have insurance coverage, you can file a claim against Uber to cover your injuries.

If you or someone you love has been injured by an Uber driver or another negligent motorist in Southern California, call a dedicated and trial-ready car accident attorney at the Halpern Law Firm. We fight for the compensation you and your family deserve. Contact us at 818-785-5999 today. These cases are handled on a contingency basis, meaning you won’t be charged any attorney’s fees unless we win.

By Halpern Law Firm | Posted on October 26, 2021
Tell Us What Happened