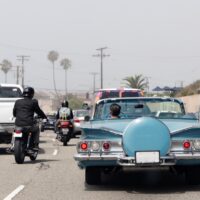 Motorcycles have significantly more maneuverability and freedom than passenger cars. Many auto drivers enviously watch bikers dart in between lanes of stopped cars during rush hour, shaving significant time off of their commute. The practice can, however, appear dangerous. Are bikers allowed to zip around slow or stopped vehicles? What are the restrictions on motorcycle riding behavior? Continue reading to learn about the practice of lane splitting in California, and if you’ve been hurt in a motorcycle crash in California, call a knowledgeable Agoura Hills motorcycle injury attorney.

What is Lane Splitting?

Lane splitting, also known as “white-lining,” occurs when a motorcyclist rides between the lanes of traffic. When traffic is slow or stopped, bikers can fit between the cars in two lanes heading the same direction by riding on the white line in between. Lane splitting is illegal in most states and counties across the country.

Is Lane Splitting Legal in California?

While lane splitting is illegal nearly everywhere in the United States, California plays by its own rules. Lane splitting is legal in California, so long as the motorcyclist is otherwise following the appropriate traffic safety rules and guidelines.

As of 2021, California is the only state in the country to explicitly allow lane splitting. Several other states have indicated they are considering whether to permit lane splitting, including Oregon, Texas, Connecticut, and Massachusetts.

There’s Not Much Data on the Safety of Lane Splitting

The reason most states ban lane splitting is due to a generally held belief that lane-splitting is dangerous. It seems intrinsically true that darting in between the lanes of traffic is inherently dangerous, opening up bikers to sudden movements by drivers, exposing them to sudden changes in the flow of traffic, and subjecting all motorists to the danger of two vehicles riding extremely close to one another.

In reality, however, that’s all there is: a belief based on “common sense.” Although aggressive tactics such as lane splitting while speeding and ignoring inclement conditions like bad weather and road hazards are certainly unsafe, there is little data to suggest that lane splitting by itself, when executed by a trained rider, is inherently dangerous. There is simply not much data on the topic generally.

A 2015 study by the Safe Transportation Research & Education Center at UC Berkeley found, however, that only about 17 percent of motorcyclists who crashed between June 2012 and August 2013 were lane-splitting at the time of the collision. According to the authors of the report: “Lane-splitting appears to be a relatively safe motorcycle riding strategy if done in traffic moving at 50 mph or less and if motorcyclists do not exceed the speed of other vehicles by more than 15 mph.” The study emphasized that it lacked sufficient data, however, to truly evaluate the safety of lane-splitting (such as pre-crash data on a set of bikers comparing whether lane-splitting made them more likely to crash).

What Obligations Do Other Drivers Have to Motorcyclists?

Bikers who split lanes are still subject to the same safety rules and practices as bikers at any other time: Follow posted speed limits and traffic signs, adjust for inclement weather and other conditions, use proper signals, etc. It’s important to note that passenger car drivers have duties as well when it comes to driving near motorcycles, especially given that lane splitting is legal in the state.

Notably, intentionally blocking or impeding a motorcycle in a way that could cause harm to a rider is illegal. Likewise, opening a door to intentionally impede a motorcyclist is illegal. If a biker is harmed after a driver intentionally creates an obstacle to lane splitting, the driver could face significant penalties and liability. The California DMV also notes that drivers in the far left lane should move to the left of their lane to ensure bikers have ample space to pass.

If you or someone you love has been injured in a traffic accident in Southern California, call a dedicated and trial-ready motorcycle accident attorney at the Halpern Law Firm. We fight for the compensation you and your family deserve. Contact us at (818) 785-5999 today. These cases are handled on a contingency basis, meaning you won’t be charged any attorney’s fees unless we win.