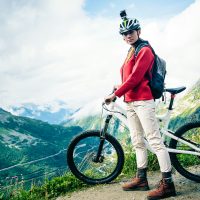 Helmet cameras can be inherently fun–cyclists can watch and edit their rides, sharing with friends and social media followers. In addition to entertainment value, helmet cameras carry a number of practical applications. The footage can be used to help cyclists improve their skills, identify problem points, check for blind curves, and learn from other cyclists. Helmet cam footage can even serve as evidence for a legal claim should an accident occur. Below, we discuss how helmet cameras might help (or hurt) your legal case should you be injured in a bicycle accident. If you’ve been injured in a bike accident in Southern California, reach out to a seasoned Calabasas bike accident injury attorney to help you strengthen your case and maximize your recovery.

If you were struck by a negligent driver while riding your bike, you have the right to seek compensation from that driver and/or their auto insurance provider. To recover, you’ll need to prove that that driver caused your accident and that they did so by disobeying the rules of the road or otherwise acting negligently.

Bike cam footage can absolutely help your insurance or legal claims. So long as the footage can be authenticated, you can introduce the footage as evidence in your insurance claim or legal case. If you caught the driver on camera swerving, failing to signal, speeding, encroaching on the bike lane, or doing anything else that contributed to your accident, share that footage with your personal injury lawyer. Camera footage can often become the strongest, most direct evidence supporting your case.

Evidence Can Help or Hurt You

It’s important to keep in mind that helmet cameras serve as neutral evidence in a personal injury case, which can be used to hurt your claims just as much as it can help. If you engaged in negligent behavior before or after your accident–such as speeding in between lanes of traffic, turning or shifting lanes without checking or signaling, or riding on inappropriate sidewalks or roadways–your helmet camera might have caught that footage. That footage can be used to challenge your claim or at least to reduce your recovery.

If the defense and/or insurance company learns that you have helmet cam footage, they can subpoena that footage as evidence to use in your case. You do not have the right to hide or destroy that evidence once they learn about it. Doing so could harm your case and even put you in legal hot water. Talk to your personal injury lawyer about your claims to discuss whether you should introduce the concept of helmet cam footage in your case.

Perhaps one of the more intangible benefits of wearing a helmet cam is the effect on the behavior of everyone around you. When a driver sees a cyclist wearing a helmet cam, they instinctively know they are being recorded. This might cause them to be more cautious, give the cyclist more space, and generally behave more courteously. The impetus toward additional care might extend to other cyclists, pedestrians, and even the cyclist with the cam. By putting everyone on notice that their behavior is being recorded for future judgment, everyone might just be a little safer on the road.

If you or someone you care about has been injured in a bicycle accident in Southern California, the experienced personal injury legal team at the Halpern Law Firm is here to help. We fight to get you the compensation you and your family deserve. Call us at 818-785-5999 today for a Free No-Risk Confidential Consultation. These cases are handled on a contingency basis, meaning you won’t be charged any attorney’s fees unless we win.

By Halpern Law Firm | Posted on September 20, 2022
Tell Us What Happened