Bicycle Laws Every Rider Should Know 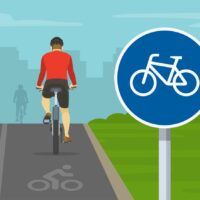 In many ways, California seems like a haven for bike riders. The weather is excellent year-round in many cities, there are designated bike lanes on roads, boardwalks, and beaches, and California has enacted laws giving auto drivers specific responsibilities designed to avoid accidents with bicycles. Unfortunately, the whole picture may not be so rosy: California, and especially Los Angeles, are particularly dangerous for cyclists.

Below, we discuss the important bike laws that every cyclist should keep in mind. If you’ve been hurt in a bike accident, whether as a cyclist, a pedestrian, or a motorist, reach out to a seasoned Calabasas bike accident injury attorney.

The Vehicle Code Applies to Cyclists

The first thing all bike riders must understand is that cyclists are subject to the same obligations under the vehicle code that apply to other motorists. Cyclists must obey speed limits, stop signs, and stop lights, as well as other rules of the road such as stopping at crosswalks and giving way to pedestrians.

Keep to the Right

California law requires cyclists to keep to the right side of a street while riding, except under certain circumstances. The exceptions to the mandate to stay to the right include:

If there’s a designated bike lane, cyclists who are traveling below the normal speed of traffic on that road must stay within the bike lane. The same exceptions apply. Cyclists in the bike lane can only leave the bike lane when it’s reasonably safe to do so and while making the appropriate signals.

Bike riders must follow the direction of traffic while riding. If necessary, they can walk their bikes on the sidewalk.

Cyclists cannot cover both of their ears with headphones, earplugs, or other obstructions to hearing. Bike riders must have at least one ear uncovered in order to hear vehicles, emergency sirens, cyclists, and potential hazards.

Vehicle Drivers and the Three Feet for Safety Act

Bike riders should also be aware of how motorists are required to treat them. Since 2014, motorist drivers have been required to provide a minimum 3-foot buffer between the motor vehicle and any adjacent cyclists. If road conditions prevent the driver from maintaining a 3-foot buffer, the driver must slow to a reasonable speed before passing the cyclist to avoid risking the cyclist’s safety.

If you or someone you love has been injured in a bicycle crash in Southern California, call a decisive and successful bike accident lawyer at the Halpern Law Firm. We fight for the compensation you and your family deserve. Contact us at (818) 785-5999 today. These cases are handled on a contingency basis, meaning you won’t be charged any attorney’s fees unless we win.